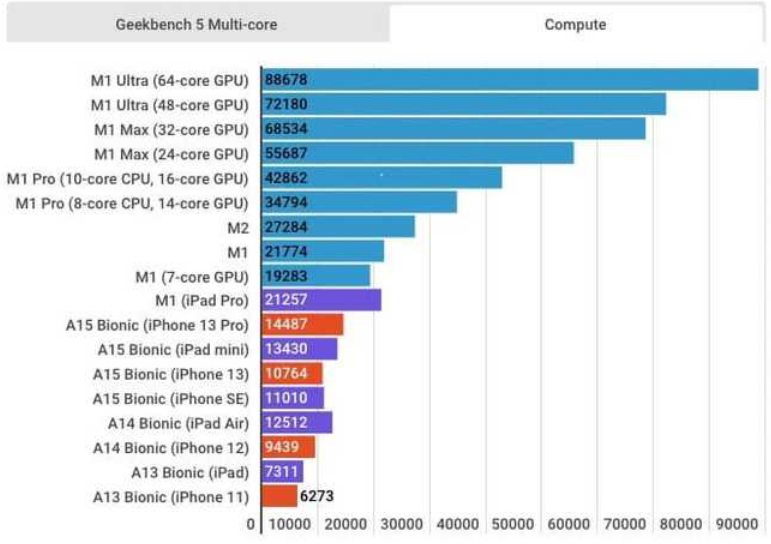 Earlier this month, Apple unveiled its latest M2 chip at a WWDC event, along with the MacBook Air and MacBook Pro. The latter is available now, while the MacBook Air will be released sometime next month.

The M2 chip in the new laptop is very powerful in terms of CPU and GPU performance. Over the past few days, we've seen several reviews showing the chip's performance and how it handles heavy tasks. Recently, a new comparison table has emerged, aiming to show the performance of the new M2 chip versus the old Apple chip, from the A13 Bionic to the M1 Ultra.

Apple is preparing to launch its next generation 3nm M2 Pro and M3 chips in the coming months. Earlier this year, Apple also unveiled a new Mac Studio with the M1 Ultra chip. The new comparison chart is designed to reflect the performance differences between Apple's chips, from the A13 chip in the iPhone 11 to the M1 Ultra in the Mac Studio.

The comparison was conducted by Macworld, which shared GeekBench 5 results for all the latest iPhone, iPad and Macs processors. It is worth noting that temperature control at different clock speeds may result in different performance, so this result is for reference only.

The results are hardly surprising. The M1 Pro and M1 Max chips are the faster chips in the MacBook Pro line. You can see the table above for Geekbench 5 multicore and calculation comparisons. Apple will release more powerful M2 chips in the coming months, which will further improve CPU and GPU performance.

HillcrestLabs is a leading global supplier of motion control software and hardware. The company has strategic partnerships with LG, Samsung,…